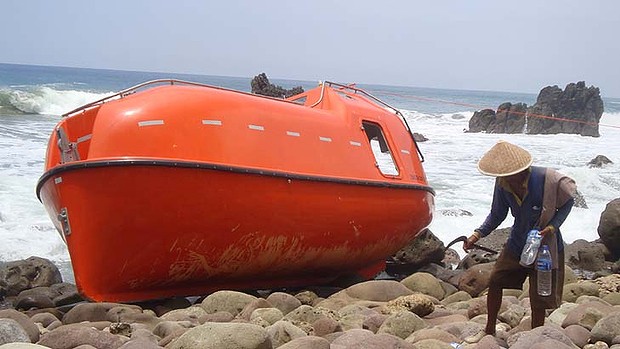 I watched the ABC’s news on the 17th March 2014 and was appalled at the report on the treatment of asylum seekers being turned back from Australian shores, forced into small, claustrophobic  orange lifeboats, and then cast adrift within sight of Java after being towed out of Australian waters.  It is an Orwellian plot, full of doublespeak and created enemies in order to distract and entertain the people.

Stories are emerging of the dreadful treatment by Australia of those seeking refuge.  To be an asylum seeker and refugee is not illegal. The changing terms that Government is now calling these people does not change the names we need to use in describing our Government’s treatment of them.  In a recent blog, I asked ‘when did Australia become cruel and vindictive in its treatment of those who are less fortunate than ourselves’.  The official silence, refusal to talk, the daily cover-ups, the blatant propaganda and misinformation is shameful and Australia’s leaders should be ashamed of the direction they have taken us.

The impact of this treatment is also having an effect on our navy personnel, who are themselves struggling with the dreadful duties they are required to carry out in our name.  I wonder if they thought this was what they signed up for as young men and women joining our defence forces.  Mistreating vulnerable children, women and men who are in fear of their lives while we are in breach of any number of human rights obligations is unacceptable.

I watched too, the protests that were reported over the weekend across the country as people united against the increasing indignities and disrespect that they are feeling by the current Federal Government.  Our capacity as a society to tolerate ill treatment of the most vulnerable and poor will only lead to more community unrest and increasing social isolation and alienation.  God calls us to be in relationship with each other, not to ignore the ‘other’ as being of no account, because they’re different.  It is time to change this storyline.