…To See the Face of God!

‘Do Not Be Alarmed!’ 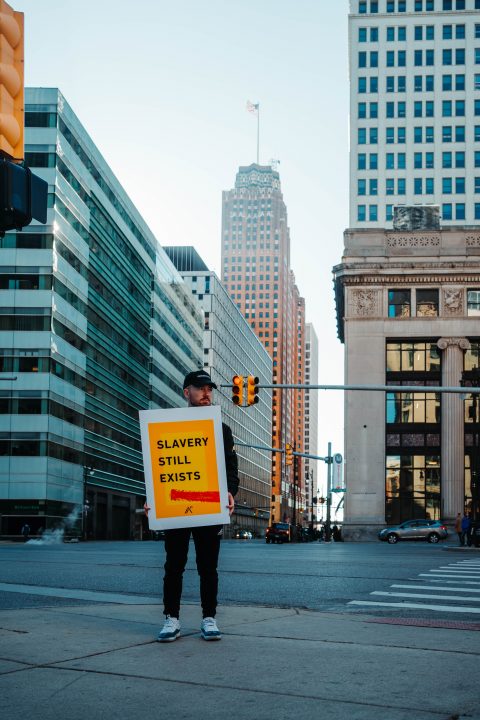 Jesus’ words in Mark 12:38-40 offering the story of the behaviour of some scribes in the temple’s outer courts, come alive in our time:

Beware of the politicians who like to walk around in fancy clothes, and to be greeted with respect in the marketplaces, and to have the best seats in the assemblies and places of honour at banquets!  They devour widows’ houses and for the sake of appearance offer far too many excuses and lies for their pork barreling and self-promotion.  They will be held accountable in the end.

I’m assuming you noticed I changed the words, but in Jesus’ time, the scribes were our equivalent of the politicians.  They were the people with power and influence.  They often negotiated their way into office through lies and half truths and by refusing to be embarrassed or ashamed.  They made promises they didn’t keep and while they were supposed to be the people’s advocates and expected to be trustworthy, in reality, they sponged off the poor, buying luxuries with their middle-class tax-breaks.  Today, they are driven around in government cars, live in mansions and wriggle out of the conflict of interest declarations while justifying their corruption and greed.

However, we know there are others in our society who behave the same way as some of our politicians.  Those who don’t like to be reminded of the difficulties others experience; who say proudly they’ve never seen or experienced racism, gender discrimination, poverty, and exclusion. I think such people exist in most organisations across our communities, anywhere which focuses on money, power and influence, rather than the good of others, which means even the church is not immune.

I watched a programme this week on the murder of George Floyd in the US by four police officers in May 2020.  Three officers stood by, keeping bystanders back from becoming involved, as George Floyd gasped out his breath over 8 agonisingly long minutes and 15 seconds until he lost consciousness, with the police officer remaining kneeling on his neck for another minute and 20 seconds until the ambulance arrived and George Floyd suffocated to death.   A republican official said until he saw the footage, he had never realised such things happened.  He thought maybe, it was a one-off.

Jesus sat in the synagogue and watched some of his fellow Jews behave in ways demonstrating their own privilege and entitlement without any self awareness.  The scribes behaving like this were unaware of their privilege and did not care how others saw them. Those who were aware, had no difficulty in recognising who Jesus was talking about.

A few weeks ago, I was dealing with a complaint about someone’s sense of entitlement and their outrage when they were asked to try and see another person’s perspective about their behaviour in a parish.  This person certainly wore long robes and liked to have the best seat and places of honour.

This person unwittingly devoured without even taking breath. The request to behave differently, to learn about the other’s situation and understand their circumstances, was apparently, completely unreasonable and this person’s sense of outrage and offense was matched only by their blindness.

As Jesus tells the story, he is also not simply talking about the dangers of behaviour, he is pointing to the danger to our souls as we refuse to see God’s will and display a blatant disregard for the temptations to which the scribes in this story had succumbed.

The poor today, as in Jesus’ time, are getting poorer, while the rich continue to become obscenely rich.  Far too many people are greedy and cannot contemplate or imagine living more simply so their neighbours may simply live.

We should not desire to become like them.  The prosperity promises always happen at someone else’s expense. The struggle to keep a roof over a person’s head, the need to work at three jobs to pay the rent and put food on the table, the constant prioritising of which bill to pay, and what to leave out, is exhausting and constant.  The rich are unaffected.  The burden of tax cutbacks always falls hardest on the poor.  It affects mostly the people who are hidden and voiceless.  The burden settles on the widow and the orphan.

Mark’s use of the word ‘devour’ in the story is intended to remind us of the violent killing and eating of prey by predators.  The devouring of our poor, the vulnerable and dispossessed is as brutal and is completely unacceptable.  Our desire to have more properties, assets, wealth and entitlements, make us blind to the desperation and poverty right in front of us which are the consequences of our choices.

Jesus then sat in one of the outer courts of the temple and watched those making donations to its treasury. (Mark 12:41-44) The money boxes had trumpet shaped openings, so the coins would rattle into the boxes and the larger the donation, the louder the noise and the more impressed would be those nearby who heard the amount being given.  However, giving out of abundance does not equate to giving in love.

The widow, who had nothing, would barely have heard her pitiful offering rattling and sliding into the box.  The officials accepting the temple donations would have looked at her with contempt.  Her giving and her status in life, a woman, a widow, without a male protector and poor, added insult to injury as the temple’s officials were interested only in those who could maintain their status quo.

The privileged wealthy always rest as a burden on the poor and dispossessed, those living with disabilities, the elderly, those without superannuation and health insurance, those without their own home or assets.  Who speaks for them?  Jesus does, and so should we who follow Jesus.

He said, ‘Beware of being privileged’.

The temptation in this story is to start to build hatred and division for the other, depending on which side of life’s circumstances you feel you belong.  Our hatred of the rich may be a mask for our own unhappiness at not having what others have.

We too are often privileged.  We sometimes get so used to our privileges we feel entitled to them.  We have forgotten to notice all God’s blessings we do have.  We rarely turn down honours when they are given.  If someone respects us and notices our good behaviour, we are pleased and affirmed.  However, we tend not to notice the poor person waiting outside the church begging, or the person having to work on the Sabbath to make ends meet.

Beware of being religious.

Sadly, most of the abuses and injustices done to the poor and the voiceless are not done with overt evil intention.  They are not personal.   No-one expressly wants to hurt the elderly, be rude to the foreigner or reject the refugee, the homeless person or the drug addict.  Likewise, the scribes were not criminally bad; just like our politicians who stay mostly within the law which they simply stretch to suit themselves. Just like us as we stretch our image of God to suit ourselves and ensure God is in our corner.

Beware of being blind.

However, we are part of a system determinedly perpetuating our advantages over the majority of the world’s citizens.  Our latest reach for privilege and entitlement now includes our rejection of the need to tackle climate change, the need to support other countries with their covid vaccines, the need to give our Aboriginal brothers and sisters a voice in our constitution.

We are so much a part of a larger system in which we are comfortably settled we no longer see our advantages.  Our cars, our homes, our clothes, our food, the price of our fuel, our medical benefits are all ours at someone else’s expense.  There are people enslaved in sweatshops to put clothes on our backs at the right price, food and red meat on our tables every day, people to clean, serve, care and endure to ensure our comforts. This is all so we can hold tightly to our privilege.

Beware, Jesus says, who will receive the greater condemnation?

Jesus out of love, put everything he is on the cross, so that we might live.  Jesus shows us as the risen Christ it is possible to live differently in love.  Its time to see as Jesus sees and live like Jesus in God’s love with our neighbours.  Any excuses are no longer honest or acceptable.