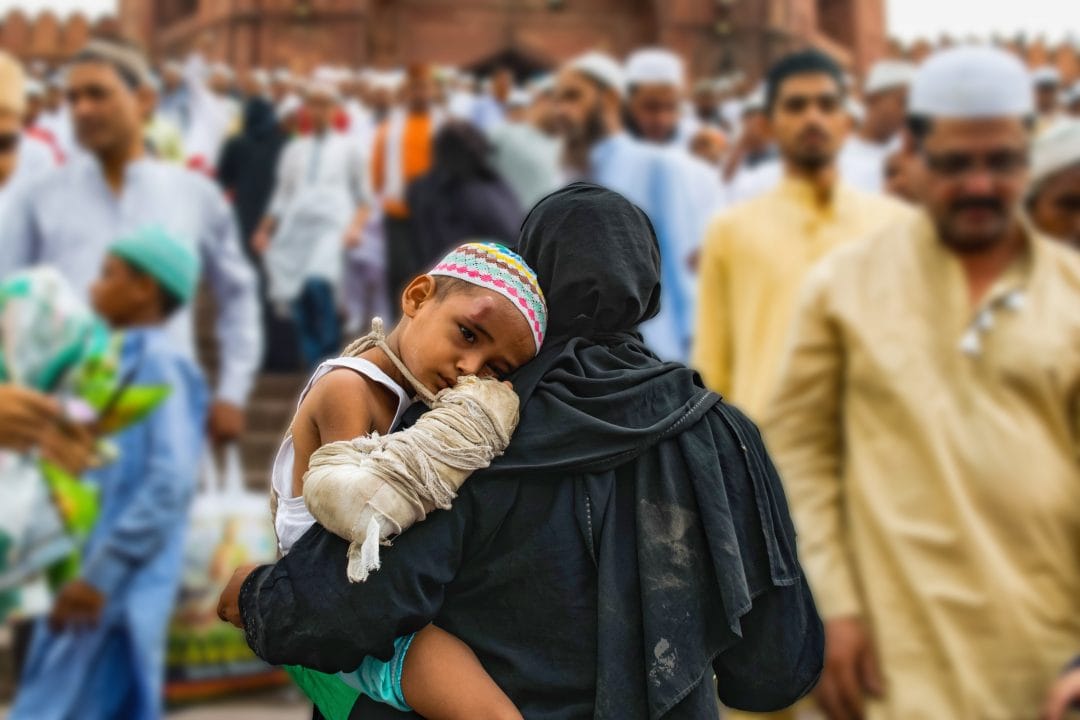 In Mark 8:27-38 Jesus answers this question. He tells us who is following him and why.

Jesus had travelled to Caesarea Philippi, north of Galilee, part of the kingdom ruled by Philip.  It had once been a great centre for Baal worship.  On the hillside was a gleaming white marble temple which Philip had built to honour the Roman Emperor Caesar, ruler and god of the known world.   Near the temple was a cave, thought to be the birthplace of the Greek god Pan, the god of nature.   Into this region, among all the competing gods came Jesus and his disciples with their discussion about the Messiah, discipleship and life.

The degree of discomfort in the discussion about Jesus’ identity is deliberately escalated by Jesus; who starts out by gently asking:

It could easily be mistaken for an idle question, like checking out what people are saying about the latest celebrity.   The disciples respond in the same way. The answers come promptly.  Jesus is John the Baptist, Elijah, or one of the prophets. The crowd has certainly been asking the same question, as they wonder about Jesus’ teaching authority (1:27), his healing capacity and forgiveness of sins (2:1-12), and his authority over the wind and the rain, nature (4:41).

The disciples had likely asked themselves the same question.  Who is this man they are following?  Where is he taking them, for what reason and to what end?

Clearly Jesus had made enough of an impression for people to realise he was different, yet the answer over his identity wasn’t immediately obvious.  Herod was looking over his shoulder at the idea he could be John the baptiser; the religious authorities were concerned at the suggestion he was Elijah returned or a prophet.  Life was never comfortable with a prophet telling truth to power.  They did not want this identity to become accepted when he was not one of them.   Jesus pushes the disciples again:

This question strips away the polite commentary and gossip.  It demands a disciple answer honestly.  They, like us must take a personal stand.  While the answer may not reveal who is Jesus, it will certainly reveal who is the disciple, just as it does today. The first time the term messiah appeared in Mark, he states (1:1), this is:

The beginning of the good news of Jesus Christ, the Son of God. (1:1)

Mark now uses the term again (8:29). Messiah, translated in Greek is christos from which we find the word Christ.  It means ‘one who is anointed’ and highlights the expectation of Jesus being anointed as king.

At one level, the use of the word christos points to the unveiling of God’s chosen one, exercising great authority and power, leading the restoration of Israel and God’s chosen people, both nationally and religiously.  Peter and the other disciples were pointing back to God’s promise as they understood it, for a Messiah to change their lives, through power, violence, war and death, but this time, with God on their side.

We remember this week, the thousands dead from the twin tower bombings in the USA 20 years ago, and the subsequent millions of deaths around the world in escalated war, terror, beheadings and suicide bombings. The power and temptation to kill exerts compulsive fascination for those seeking to impose their will over others at any cost.

Is this what God wanted for God’s people, Jews and Gentiles alike?  Is this the shortcut we still want to take, choosing this option of death, with constant war, terror, violence and trauma with imposed peace bringing oppression; rather than a hard worked peace created and established through respect and love.

Jesus’ reflection on this as Messiah is still relevant today as it was 2000 years ago.

Peter wanted the power, glory, honour, wealth and privilege owed to a worldly king.  His horror at the description of discipleship offered by Jesus as Messiah was palpable, no doubt reflecting the discussions and hopes of all Jesus’ disciples.

Jesus [He] began to teach them that the Son of Man must undergo great suffering, and be rejected by the elders, the chief priests, and the scribes, and be killed, and after three days, rise again.  (Mark 8:31-32)

In one of the strongest exchanges between them, Jesus calls Peter ‘Satan’ for tempting him with worldly power, the same old story giving the same old results.   Against their ideas of what the Messiah must be like, Jesus tells them differently, and people leave. This version of the story is nonsensical and impossible in the world today, whether in the Roman Empire or among Western white powers, get real!

If any want to become my followers, let them deny themselves and take up their cross and follow me.  For those who want to save their life will lose it, and those who lose their life for my sake, and for the sake of the gospel will save it.  For what will it profit them to gain the whole world and forfeit their life?  Indeed, what can they give in return for their life? (Mark 8:34-36)

It is a powerful rejection of Peter’s temptation to go with the world’s expectations.

As we hand Jesus his job description, we impose our own expectations, building a prosperity gospel suitable for 21st century Australia. Perhaps its a social gospel, or a spirituality gospel, or a gun-carrying, patriarchal, nationalistic white gospel seeking to create another empire; whatever our desires, we make Jesus into a saviour to suit us.

These are all false gospels feeding our greed.

This story at the centre of Mark’s gospel is life-changing.  We are beginning to hope Jesus can change the world and be our saviour.  Perhaps he can change things for us now, today.  Yet, just like Mark’s listeners, like Peter listening to Jesus, people familiar with oppression of the poor, the crushing systems of power to subjugate, perverting the will and purpose of God, still seek to do so in favour of their own purposes, physically, emotionally and spiritually.

This gospel told by Jesus describes instead the journey of faith experienced through suffering; suffering inflicted by humans on humans through war, violence, greed, fear and hatred.  Jesus gives us a different story, of lasting hope made real.  He looks beyond the suffering, the rejection and death to resurrection, forgiveness, to love, hope and glory.

It is ironic Jesus’ apparent weakness becomes his strength and our strength.   It gives us hope God loves and cares enough for us to change the world.

Peter’s certainties crash to the ground.  Only when Peter gives up his ideas of what the Messiah can and cannot do, is he ready for true discipleship.

Our ethics in this life, our understanding of Jesus’ invitation means denying ourselves instant gratification and choosing a life sharing in Jesus’ suffering as we care and love the people around us, friend or stranger.

It is an act of choice you and I must make, like Peter, compelling but not compelled.  It is an act of faith self-denial, a way of dislocating ourselves, displacing self-interest, being knocked off-centre for the sake of Jesus and following him,

It is a crucial divide between those who follow Jesus on the way of suffering and those who are not.  True discipleship is defined not by what one might receive, but by what one is willing to give.  This call to follow is for everyone.  This is as countercultural as you can get, just as it was in Jesus’ time.  This is the opposite of any prosperity gospel.  It is the heart of the true gospel: God, our Creator loves and cherishes us regardless of our status in this life.

Everyone suffers.  I don’t want to make it worse nor do nothing about it.  Some try to flee the suffering.  These who are willing to interpret their suffering as the spiritual job of letting go this worldly life, who are willing to lose their lives as they have made them, for Jesus’ sake, will receive a new and better resurrected life.  The way through suffering is the way taken by any who would become a follower of Jesus.

Jesus’ invitation is clear:  we can embrace Jesus, the loss of our worldly dreams, take up the life of Jesus, let go of everything else and open our hands to receive the self God intended us to be, from the beginning.

So the answer to the question about why anyone would bother to come to church, lies with you and I and Jesus.