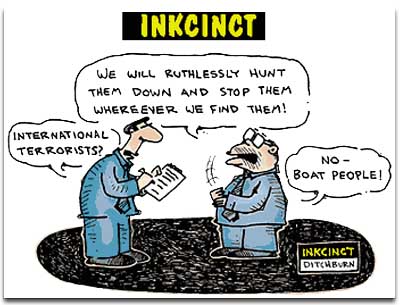 It is another sorry chapter in Australia’s treatment of asylum seekers that we have seen in recent days.

There is a whiff of deliberate redemptive violence emerging in the current solutions being developed by the Federal Government, resulting in the asylum seeker being punished for daring to seek refuge in Australia.  The argument goes like this: because the asylum seeker dares to come to Australia, the asylum seeker must now be processed off-shore in detention camps that look like concentration camps in defiance of Australia’s obligations of the Refugee Convention; and, in order to prevent a bigger crime by the people smugglers, this processing and the limited final settlement options have now become the accepted strategies for stopping the refugees coming to Australia.  All this is being done in our name.

These strategies are being applied as they apparently provide successful deterrence of asylum seekers coming to Australia. Australia has sought out two of the poorest and most vulnerable countries in the world and has persuaded them to participate in this shameful trade in refugees, and it results in Australia offering bleak choices for settlement to those finally being released from our off-shore detention camps when their claims are proved.

Scott Morrison, Immigration Minister is quick to remind us that refugees are ‘entitled’ to a safe place to live, not to economic security.  It would be interesting for the Minister to try and imagine living a safe life without economic security along with doing without health, education, housing and spiritual safety and without necessarily speaking the language.

Both Papua New Guinea and Cambodia, the two countries engaged by Australia to participate in this trade, have enough challenges in caring for their own citizens.  Bringing in strangers into their countries who are without resources, who are suffering from torture and trauma, in fear of their lives and wrenched from everything that is familiar for them, and who have been further traumatised by Australia’s treatment of them, is not an ethical solution.

Just because the limited goal of ‘stopping the boats’ is apparently achieved, this does not justify the goal in the first place nor does it then justify the means by which it is achieved.  Too many poor people, poor countries and relationships are damaged.   Our rejection of those who are seen to be different and the fear and envy that others might end up with something to which we might think they aren’t entitled because they don’t belong here, is not the way we should live or think as a nation with our Values.

For the Government to claim success because it has stopped the boats from reaching Australia is specious and a deliberate averting of its gaze away from the collateral damage we are causing.

As a Christian, such behaviour is an anathema. It is time we created other ways of solving this challenge.