The Peace of God! 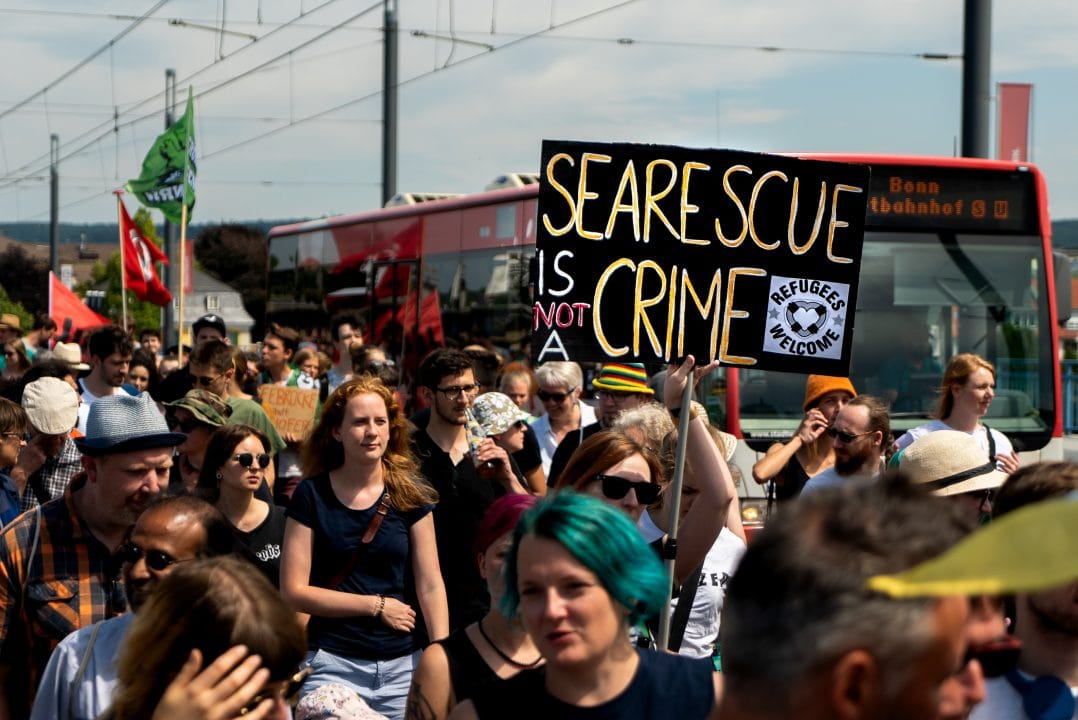 I was watching ABC’s Foreign Correspondent recently about refugees crossing the Mediterranean from Africa, trying to reach Europe through Italy and Malta.  Both countries have taken the decision to ignore the international law of the sea, like Australia, as they refuse to save boats with refugees in the Mediterranean.   In a two week period, one man, who has had his own boat confiscated by the authorities to stop him helping those crossing, and who is now accompanied by half a dozen other like minded men and women, has saved over 300 people.  He now uses a small yacht and when he finds boats filled with refugees, he literally rings up and emails either Italy or Malta to come to their rescue.  He refuses to let the boats disappear without trace.

As this extraordinary man said, ‘thousands die each year making the dangerous crossing’.  To his detractors who argue he encourages others to make the dangerous crossing, the statistics bear out his rejection of that claim.  His presence does not encourage people to make the trip as the numbers he saves by comparison are tiny.  The boats come regardless.   All he can do is make sure some are saved as he cannot stand idly by; and with his actions he holds government authorities, and those who turn their backs, to account.

He said:  they are human beings who cannot be left to drown.

The Italian government credits the Australian government with showing them what to do for this problem.  They fund the Libyan government, giving them boats, training their coastguards how to tow refugees back, how to imprison them in concentration camps for years so they are forgotten.  Our reputation is profoundly appalling.

You may be asking why I tell this story in response to Mark’s story of Jesus’ return home to Galilee and Capernaum with his disciples.  While travelling together on the road home, Jesus tells them for the second time about his impending betrayal, torture and death at the hands of religious authorities and the Roman Empire; other ordinary human beings now actively seeking his death.  (Mark 9:30-37).

Mark highlights a clear lesson for us all.  The resurrected Christ will not change the world’s future as his disciples had hoped with power and prestige for his favoured followers.  Jesus refuses this choice, this temptation.  He will not overthrow the Romans and set up a new Jerusalem.  He will not reign politically, and so he will not give them positions of power, wealth and authority.    There is no special privilege in following Jesus. First among servants doesn’t sound so great. The resurrected Christ is not changing our future as we hope and desire.

Why then do we follow him?  It is a sobering question for all of us.

Even though Christianity spread and grew with the suffering of the saints, ordinary men and women, it became over time, a religion of the powerful.  Perhaps this is why the church as we now know it, is not living as though death has been defeated.

In this wealthy and powerful country, where people suffer homelessness, imprisonment, racism, discrimination and ongoing unemployment, the church often seems to be more intent on saving its own life in this world rather than risking its life to follow a living Lord.

Mark’s Jesus is a secret Messiah, who repeatedly asks for secrecy and silence, not wanting others to know his movements and what he was teaching.  It was a very political request and decision.  Jesus’ status as the Messiah politically challenged the colonial powers to set the oppressed free.  It means those choosing to follow Jesus face the same accusation of undermining established governments.  We face the same dilemma.  What type of Christians are we in our country?   We can look at Jesus’ disciples who:

…did not understand what he was saying and were afraid to ask him.  Mark 9:32

It sounds familiar.  A worldly faith is much more comfortable.   Asking what we are to do as Jesus’ disciples is challenging.  Although we may not be routinely martyred as they are elsewhere in the world, what is our work as disciples today?  Perhaps our fear is not of direct persecution but of having to make more rigorous sacrifices, to give up the privileges we hope will secure our future.    Like Jesus’ disciples, many Christians today believe they can secure their future in this world and in the world to come, by money in the bank and by success.  Accordingly, our fear and lack of faith is tied to affluence.

We see victims of persecution among the most impoverished and discriminated, among Christians and other religious groups.   We can see the suffering of Christ among the victims of abuse, among the starving children, and among those without housing, health care or in prison.  We see it on the seas in the boats filled with desperate refugees who weigh up death and take the risk because its better to die struggling than give up.  We hear echoes of Christ’s suffering and death on the world’s battlefields, including Afghanistan.  We see it in those fighting depression, loneliness, drug and alcohol addiction, ill health and suicide.    These children of God are all spending time on death row one way or another, in Jesus’ company. God’s Son who also spent time there, continues to do so with these oppressed children of God.

However, what struck me as I watched Foreign Correspondent, was in spite of the appalling life journey for those disenfranchised and marginalised, there is a brighter day ahead.  There is hope such suffering does not have the last word, for Jesus assures his disciples there is resurrection.  Jesus who will suffer and die at the hands of the Roman Empire and his own religious leaders and friends, will rise against his colonised induced death.  Resurrection becomes the power of God in solidarity with the oppressed, the exploited and the suffering.

It may seem the dominant powers will be in charge forever.  Those dominated and oppressed will always die, like Jesus who was betrayed, suffered and murdered.

But this is not the end of the story.  Jesus promised to rise on the third day and he did.  Resurrection is the power of the oppressed to prevail.  It is transformation from death. It is hope for every single person here today and everyone created by God.

We know the Roman empire, just like our country today, did not want a Messiah.  Our government does not want people saving refugees nor the family to be restored to Biloela; it does not want the troublesome matter of black deaths in custody to be publicised; it does not want to acknowledge homelessness, inadequate welfare, poverty and unemployment as a structural issue, but simply individual failures.   Our country does not want to freedom and justice for such as these.

I think the disciples were like us; uncomprehending and disturbed by Jesus’ expectations, his demands to see the world and his message differently.  It is challenging beyond anything.

Resurrection is the expression of God’s power in solidarity with those confronting the forces of oppression.  Living in the resurrection power of God is the act of living in the inevitable hope God’s liberation and justice will prevail.  If this is the case, then the promise of rising again is the key, not just for the end of Jesus’ story, but for ours as well.

If we know people are suffering yet do not devote ourselves to serving others because we are afraid of our future, we live as though God did not raise Jesus from the dead.  Jesus did not die of old age, yet we live as if his way is not life-appropriate for present day disciples living in an affluent country like Australia.  We have given into fear and our faith is handicapped.

If we, like the disciples cannot ask Jesus the hard question about how we should serve him, because we don’t want the answer, then we are left in a world in need of our witness, but with no real possibility of following Jesus.

Our work today, and in all our tomorrows as individuals and as a parish is to recognise the suffering here and now wherever we encounter it, the sorrow and grief of this world’s trials coming to so many people.  Let us be sorry for our own denial of the reality of Jesus’ message which is so countercultural and truly hear the good news of resurrection.  Then let us walk with our sisters and brothers globally and locally in the light of the cross and resurrection without fear.    Recognising everyone as a child of God and welcoming them, means we are welcoming Jesus.