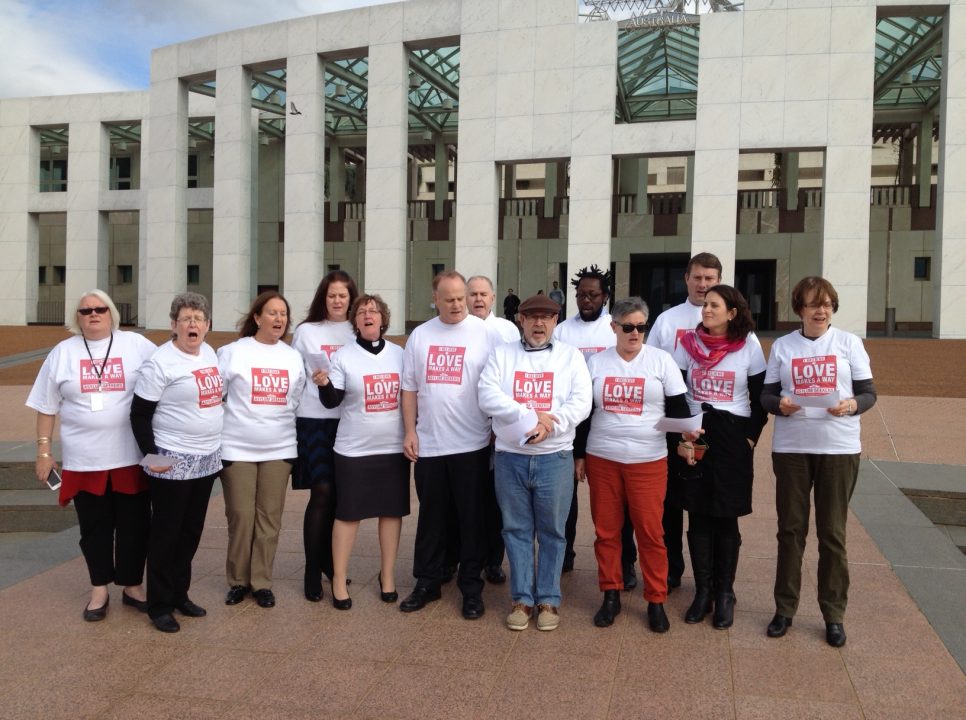 Over a dozen of us Western Australians stood outside Federal Parliament today in Canberra, to protest at the 1034 children locked up in our name by our Government in breach of the Human Rights Convention of the Rights of the Child to which our country is a signatory.  We sang Amazing Grace as we acknowledged that our protest follows in the tradition of the civil rights movement, shown to us by Gandhi and then by Martin Luther King, that outstanding Baptist leader, and we said prayers asking for forgiveness for what is being done while we stand by.  Our Government takes our silence as consent.  We are ashamed that this abuse, punishment and retribution, is being meted out to children who are locked up without access to freedom, education, housing, health, opportunities to play, make friends or even to dream about a future.

Since when did we become so cruel and vindictive to people who have no choices?  Since when did we become so frightened that we can no longer see the wonder of living in a country which is welcoming and hospitable?  Since when did we decide to deny the richness of our culture which has been built on the boat-loads and plane-loads of people who have come to this country in times of peace and war, or as a consequence of the international conflicts in which we participate around the world?  We have lost our voice in many forums, and forgotten how to protest at human rights abuses which lead to such waves of refugees.

Since when did we chose to forget that our country is a country of immigrants.  Our concentration camps in which we put people called ‘illegals’, with their names denied and removed, only given numbers, without a future and without a past, redefined as economic illegals, as we change and bastardise our language and the truth to fit our ideology.

This is a humanitarian issue, not a political one.  As a Christian leader I am so sorry that our country’s leaders, professing the same faith, can treat God’s children in this way.  Other Christian leaders and churches are uniting in the Love Makes A Way for Asylum Seekers protest.  We are very pleased to be able to join this movement that is rising around Australia.