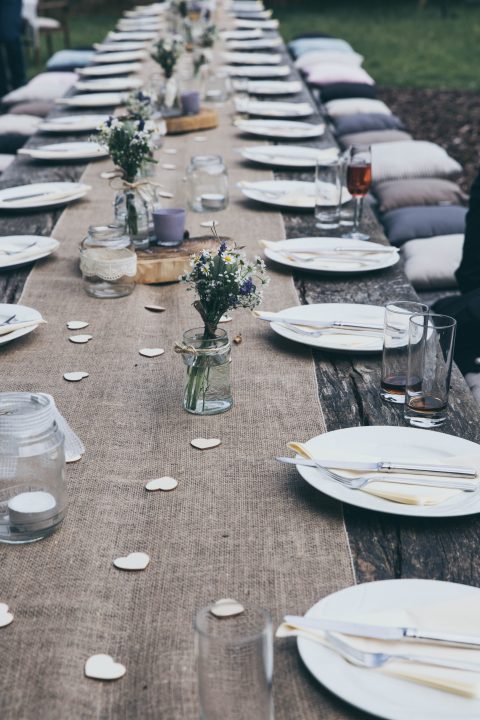 The parable of the Wedding banquet (Matt.22:1-14) is the last and most confronting of the three parables with which Jesus engages the Temple authorities in Jerusalem in the last week of his ministry.  It reminded me of the fairy story about the emperor who had no clothes by Hans Christian Andersen (1837).

In the fairy story, the emperor who loves beautiful clothes, hires corrupt tailors to make him a new suit for a public parade.  The tailors tell him it made of material which apparently anyone stupid or unfit is unable to see. No-one is brave enough to tell the emperor he has been conned, until a small boy, not in on the secret who is watching the parade asks the question:  ‘Why is the emperor not wearing any clothes?’

The Chief Priests, Pharisees and Elders are demanding answers from Jesus about his authority to preach, teach and heal both in the temple and more widely; and he has responded with a series of stories which have publicly shown them up to be without clothes, like the emperor.

As the small boy, Jesus highlights their failures in leadership, their interpretation of the law and the prophets, and their faith.  Two days later, Judas Iscariot is persuaded to betray Jesus, the temple authorities betray God and Jesus is subsequently arrested, tortured and crucified.

In the first parable of this series (Matthew 21:32) we heard about two sons who refuse to help a father in his vineyard, and Jesus focuses on shame and honour.

The second story (Matthew 21:33-44) was about a landowner with tenants in his vineyard. His attempts to collect the harvest payments lead to violence, death and exclusion. In this third story, (Matthew 22:1-14) a king invites guests to attend his son’s wedding feast, and their brutal refusals cause the king to react with overwhelming violence and death.

This third story of the Wedding Banquet is confronting.  It describes escalating violence where each refusal increases the rejection; from simple refusal to disrespect and finally to the seizure, mistreatment, violence and murder of both slaves and guests.

These themes run through all three parables and we find ourselves listening with extreme discomfort as this last parable in the series from Matthew’s Jesus deals with horrific and disproportionate violence, with fierce and final judgements for all from God.

It’s worth remembering this story was written by Matthew after the sacking of Jerusalem and the destruction of the temple by the Roman empire in 70 CE.  The appalling horror of violence and power to crush and kill by kings and empires was sadly familiar to all who were listening.

As we reflect on our world today, such violence is still real.  Rules are disregarded, those with power use it without regard for consequences and leaders are rediscovering they can break laws without consideration of any limitations.

So let us step into this week’s story.  The king sends out invitations to his son’s wedding banquet, then sends a reminder, elaborating on the food preparation for the occasion.  In telling the parable, Jesus reminds those listening in the temple and us of a similar scene with Wisdom, from Proverbs 9:1-6,

Wisdom…has slaughtered her animals, she has mixed her wine, she has also set her table.  She has sent out her servant-girls, she calls from the highest places of the town, “You that are simple, turn in here!”  To those without sense she says, “Come, eat of my bread and drink of the wine I have mixed.  Lay aside immaturity, and live, and walk in the way of insight.” (Proverbs 9:1-6)

In the Hebrew scriptures, Wisdom is God’s Spirit. She has sent invitations to come to the great banquet and people have refused to attend.  Those listening would remember the reference.

In Jesus’ parable, following murderous refusals from some of the guests the king responds violently.  He burns the city and the killers are destroyed.

The King’s second invitation is issued this time to all the people in the streets, again evoking Wisdom, as she called in the streets to all who were able.  In Matthew’s parable, the slaves do not discriminate between worthy and unworthy, but include good and bad to fill the hall.   This inclusiveness is one of Matthew’s consistent messages; everyone is invited while the judgement is delayed.

The king’s banquet is now different to what was originally described; instead, it is a feast for all.  The invitation has been scandalously broad.

In fact there are only two ways to end up outside this feast; either you disregarded the invitation completely; or you imagined an invitation this broad could not be worth much, so you slide in, still dressed in your working clothes in case the party was boring, so you could leave early.   Consequently, we find the messianic banquet looks like life on the streets, not a dinner part of the elites who imagine they can pay or earn their way into the kingdom ahead of everyone else when they’re ready.

And the invitation to the banquet is being offered to you today as you listen to this story.  We recognise our frantic culture is focused on self-interest and self-importance.   We are too busy to respond to the invitation offered by God.  We may not even recognise God’s love and grace offered in the clutter of our lives.

God’s invitation is unique, urgent and gracious, and justice is in God’s hands, not ours.

The violence remembered by those listening when Matthew was writing, continues to be experienced in the world today. It means it is not necessary to believe or say God has designed these horrors.

These are horrors we bring upon ourselves, the inevitable fruit of rushing headlong through lives so self-absorbed and comfortably oriented towards violence, the whispers or even shouts of God’s messengers do not reach us.

The king enters the banquet hall.  He has been hugely generous, offering wedding clothes to everyone for the occasion.  However, there is still one person not wearing a wedding roble.

The wedding robe is a way to describe our changed lives, changes we have made as Christians as we turn and listen to God rather than the world.   It is outward evidence of the inward transformation we experience.  The small boy who pointed out the emperor had no clothes is our moment of realisation we are nothing without God.  I think this recognition of our nakedness is a God moment. The lack of clothing points to our lives, filled with dishonesty, pretense and deceitful greed which is obvious to all who are there.

For Matthew, the ethics of discipleship are paramount.  If a person receives unmerited grace and does not respond with humility, compassion, kindness and gratitude, the person is judged, just like those who begged off the initial invitation.  In truth, it may be an ungrateful life is its own judgement, an ‘outer darkness’, desperately lonely and devoid of joy, naked and empty.

In Luke’s version of the wedding banquet (Luke 14:16-24) Jesus has slaves going out to gather the poor, the crippled, the blind and the lame and whoever can be found to fill the house.   Luke’s Jesus concludes: ‘none of those who were invited will taste my dinner’. (Luke 14:24) Matthew’s Jesus says: ‘for many are called, but few are chosen’. (22:14)

Yet God’s love is clear, direct, personal and filled with grace.  Responding to God’s call is all we need to do each day.  Jesus reminds us it is not about being worthy, rich, wealthy, influential or important, or well-dressed as we remember Wisdom’s words too.  God’s interest is in everyone whoever and wherever they are and in their wholehearted response to God’s call, because simply turning up is not enough.

The wedding invitation has been given to you personally.  The question is not whether you can manage to fit this party into your schedule or can delay by saying you don’t have the right clothes.  This invitation changes your schedule – and your life.

This is an invitation to give yourself up to God’s future, an invitation which arrives with unstoppable power, overtaking our present with a real and costly summons.   I hope you accept the invitation offered with God’s love.