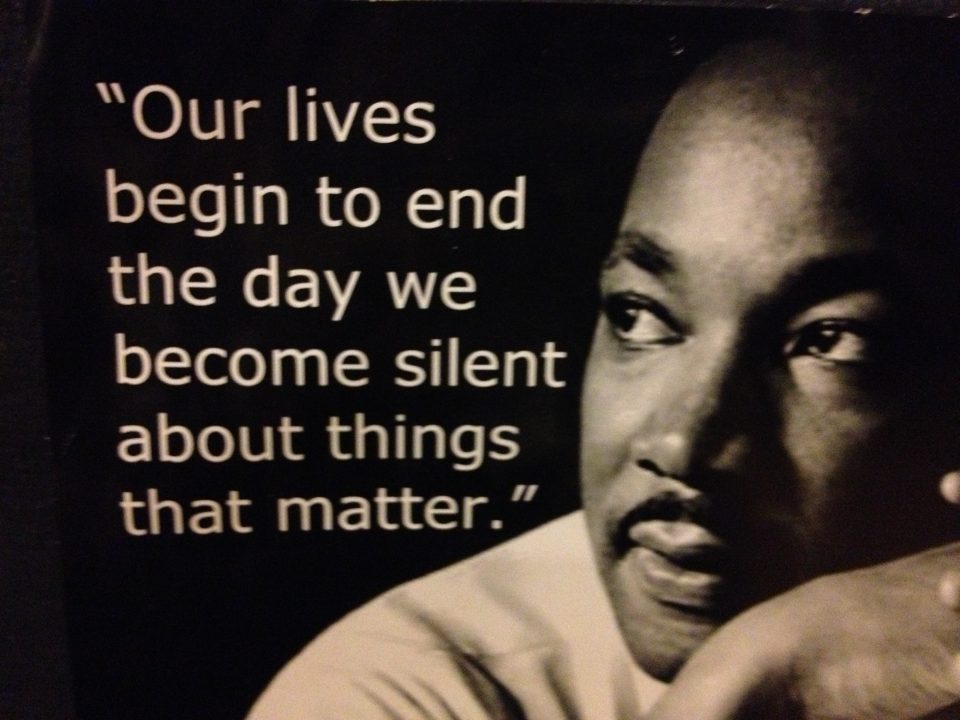 The things that matter.

One of my favourite writers and justice activist, a woman called Arundhati Roy said of her commitment to justice and peace: ‘Once you’ve seen it, you can’t unsee it’.

I recalled this simple, stark sentence of commitment as I reflected on this extraordinary experience of the transfiguration in the lives of Jesus and his three companions, Peter, James and John (Matthew 17:1-9).

Arundhati Roy was pointing to the ability of individuals and communities to remain wilfully blind to poverty, corruption, greed and selfish living and the impact this has on those without privilege or access to unearned power and wealth and, as she said, ‘once you’ve seen it, you can’t unsee it.’

The transfiguration of Jesus took place six days after Peter had declared to Jesus: “You are the Messiah, the Son of the living God.” (Matt. 16:16).  Peter had found his voice and his faith in a conversation with the disciples, where they had been comparing Jesus with Moses, Elijah and John the Baptist.

The transfiguration took place six days after Jesus had confided for the first time to his disciples what was facing him as he journeyed towards Jerusalem. Jesus was clear as he described his ‘great suffering at the hands of the religious leaders, his violent death and resurrection.’  (Matt.16:21)

It was also six days after Peter had tried to stop Jesus following this path to his death; and Jesus had rebuked him for setting his mind “not on divine things, but on human things.” (Matt.16:23)

Jesus had used strong language to stop Peter repeating what he called ‘Satan’s words’.  We remember Jesus’ wilderness temptations where Satan had delivered Jesus to a similar mountain top, inviting Jesus to enjoy the view and the opportunities available to him.

Instead, Jesus had gone on to tell the disciples if they wanted to follow him, they had to deny themselves and take up their cross in Jesus’ company.  Jesus did not pretend, downplay, ignore, or put this teaching into small print, as he clearly explained to them: ‘in attempting to save their lives, they would lose their lives; but to choose to lose their life for the gospel would be to find life in G-d.’

The transfiguration then, as Matthew tells the story after these last six days, is a moment for us all to stop and rest after our journey up the mountainside and to reflect on Jesus’ teachings and actions.  In this extraordinary moment, the transformation of Jesus gives us all a glimpse of his divine nature and his glory.   It is a moment in which to pray and give thanks to G-d, as we can now recognise we have seen G-d.

This story of the transfiguration has me asking myself what it means for us to practice transfiguration ourselves when we are walking back in the valleys of life, on our normal paths and not sitting up the top of a mountain in the visible company of the prophets and saints.

A couple of weeks ago, I talked to you about the way you and I can live as salt and light.  We are to live in and among others in our communities, bearing G-d’s light and giving light to others, pointing the Way to G-d.

Today’s story also includes the instruction from G-d ‘to listen’.  We are told a bright cloud overshadows all five men.  The three disciples are dazzled by Jesus shining like the sun, wearing glowing white clothes talking to Moses and Elijah. Out of the cloud came G-d’s voice, just as it did at his baptism; and G-d spoke:

How might we take this moment ourselves and transfigure it into our lives?  For many of us, our faith creeps up and overtakes us; there may not have been an explicit single moment when you went from no faith to faith.  For others, that was exactly your experience.  G-d’s presence suddenly transfixes you and like Arundhati Roy, ‘once you’ve seen it, you can’t unsee it’. Once you’ve heard it you can’t unhear it.

Consequently, we are to be bearers of this light and the Word made flesh.  Jesus, who is well acquainted with suffering, betrayal, doubt, hatred and fear, becomes the one who shares our human suffering and because of his unending love for us, redeems us.

The open invitation of the transfiguration is full to overflowing with love.  We are given a space in which we can contemplate and be with G-d without worrying about anything.  However, like all joyful moments, the more you try to hang on to them, the easier it seems they slip away through our fingers like water or mist before our eyes.

Peter’s desire to hold onto the experience, meant he wanted to set up camp and stay on the mountain in the company of the people he held most dear and of whom he was in awe.  This is a desire and experience with which we are all familiar.  Happiness and joy become imprinted, firstly on our hearts and then in our minds, inexpressible, mysterious and transformational.  So it is, in our relationship with G-d!

Like Peter we are tempted to say, ‘lets stay on our mountain top and live here forever’.

I think the other temptation we face is fear; fear of transfiguration and an unwillingness to trust and step into the unknown, so we let go of G-d’s hands even as G-d guides and holds us safe always.

I’ve been reading about Martin Luther King Jr in recent times, along with Arundhati Roy, whose work and examples are transformational.  Martin Luther King must have been so frightened on many occasions during the struggle to bring an end to racial injustice.  Attack dogs, fire hoses, thrown rocks, angry crowds, lynching, violence and brutality in words and deeds, by religious and political leaders and by ordinary men and women.

One moment, late at night, he was sitting at the kitchen table alone, and he heard, what he called an ‘inner voice’ telling him to do what he thought was right.  From that point on, he knew the hand of G-d was on him, and it gave him the courage to face what was ahead.  G-d was moving through him to set his people free.

The transfiguration signaled a new day was on its way in Jesus and G-d is moving us toward the beloved community Martin Luther King preached about and for which he died like Jesus.

The message remains clear and without doubt.  G-d is in the business of bringing hope and healing to this broken world.  When your eyes are opened to G-d’s future then you cannot go back.  You can’t unsee it.

What you and I can do, is go back down the mountainside and be salt and light, listening to God and being a healing presence to those who are hurting, to work for justice and peace and to offer hope to all who live in G-d’s kingdom.

G-d gives us the mountain top experiences to transform us.  They change the way we see the world and ourselves.  Business as usual is no longer possible after we have seen G-d and experienced G-d, revealed to us through Jesus.  Such experiences give us the strength and confidence in the presence and power of G-d’s steadfast love that endures forever.  They sustain us through our dark times when fear is overwhelming.


The Lord be with you.