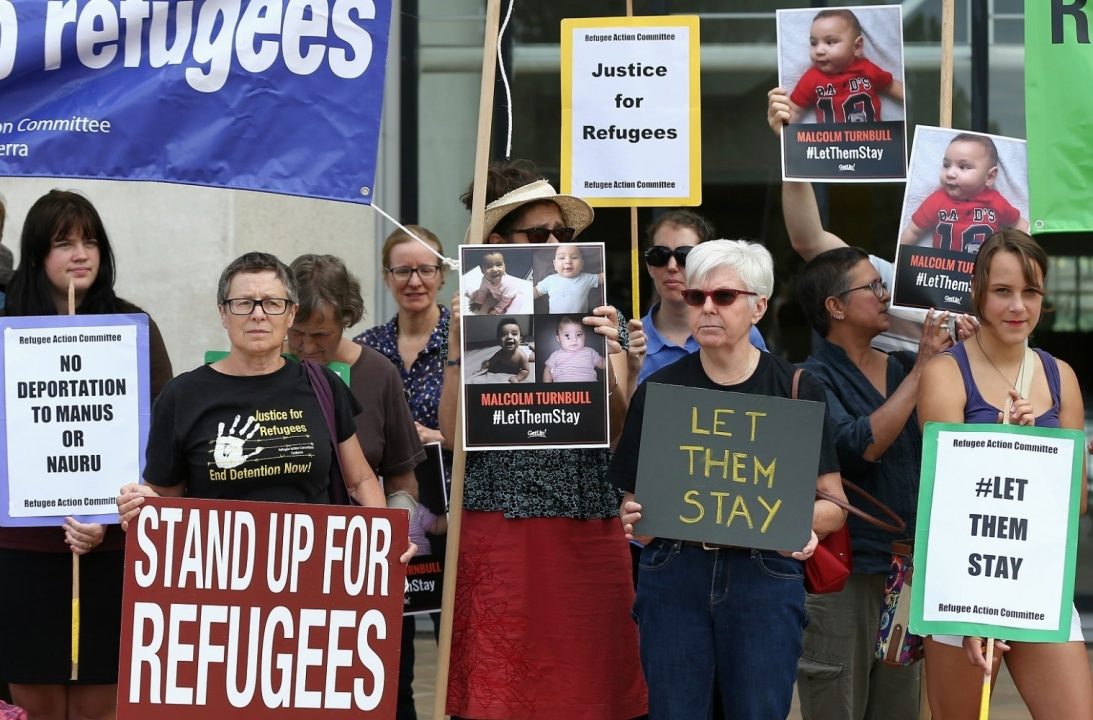 Rally for asylum seekers, including Australian born children to remain in Australia, at the High Court in Canberra on Wednesday 3 February 2016. Photo: Alex Ellinghausen

Our ability as human beings to inflict harm and injustice on others in the name of a greater good is both terrifying and horrifying. And to do so with certainty and self-righteousness, I think has the capacity to turn such decisions into being evil.

Our current debate on the plight of the 267 refugees, including 37 babies currently in Australia, who are subject to the recent High Court decision legalising their deportation to Nauru has focused our minds once again on what is appropriate both for Australia’s border security and apparently for the greater good of those legitimately seeking asylum in our country who have arrived by boat.

Hannah Arrendt, a Jewish Philosopher who tracked the trial of Adolf Eichmann, the architect of the ‘Final Solution’ for the Jews in the Second World War, talked about the use of bureaucracy to build the capacity of a system to keep individual actions separate and so allow evil to flourish. No single oversighting of the whole decision then takes place; the ability to compartmentalise the chain of activity to keep such a system in place means no single person is responsible or accountable. The secrecy and lack of transparency in our off-shore processing system is similar in character to that in place in all dictatorships and totalitarian forms of government.

While this sounds dramatic, when a government hides its cruel and inhuman actions from its own people, punishing, brutalising, and inciting hatred of a minority to send a message to another group and not because they are personally responsible for doing something wrong, there is still no justification for such decisions even if they are done in the name of the greater good. Wickedness flourishes in such an atmosphere of secrecy. Individuals are enabled to become simple ‘cogs’ in a larger machine where someone else is always responsible. Wickedness flourishes because it can be justified to the small group who do know, who are able to reinforce the behaviour and the decision. A culture of self-serving justification and shame colludes to keep such evil in place and active. It is time we as a country said ‘stop’.

It was with great heart I heard about the actions taken by church leaders around the country, protesting the latest decision on the boat arrivals in Australia and its implications. The Very Reverend Dr Peter Catt, Dean of Brisbane’s St John’s Anglican Cathedral, has made the decision to open his Cathedral alongside Cathedrals and churches around the country for the use of sanctuary. This is an ancient and long held custom providing sanctuary to those seeking refuge from brutal and oppressive forces.

Peter Catt said: We offer this refuge because there is irrefutable evidence from health and legal experts that the circumstances asylum seekers, especially children, would face if sent back to Nauru are tantamount to state-sanctioned abuse.”

Misha Coleman, Executive Officer for the Australian Churches Refugee Taskforce, said, “Cathedrals that have offered to protect asylum seekers from deportation to a place where people face rape, sexual assault, and unimaginable conditions for themselves and their children”.

It is with great grief I acknowledge Church leaders have felt such an action has had to be brought back into practice because our laws do not provide justice anymore for this very vulnerable group.

More information is provided on the National Council of Churches In Australia’s Refugee Taskforce website: www.australianchurchesrefugeetaskforce.com.au

May God bless the men and women who are standing with Christ in the marketplace alongside God’s children, in solidarity with those who are most vulnerable in our society and who are being crucified!